Germany clinched the gold medal in this Olympic Test Event at the Riverbank Arena in London with a hugely impressive performance. Having been defeated in the group phase of the competition by their rivals Australia pushed hard to gain their revenge but were overpowered by an impressive performance from the European side.

After only four minutes Australia were grateful to their goalkeeper, Nathan Burgers for keeping the scores level, as he saved Moritz Furste’s penalty stroke low to his right.

A good fast-paced game was taking shape and the German goalkeeper Nicolas Jacobi was called into action to keep out Russell Ford and Matt Gohdes.

On 12 minutes Australia were awarded a penalty stroke after a stick check on Robert Hammond. Simon Orchard scored however the Germans immediately called for a video referral, claiming Orchard had dragged the shot not flicked it. It was a pre-meditated referral as he had done the same thing against Great Britain, and the umpires ruled in Germany’s favour, keeping the scores at 0-0.

Australia took the lead shortly after as Christopher Ciriello sent a low penalty corner into the goal past Jacobi. The lead lasted about 5 minutes Thilo Stalkowski drew the last defender and found Tobias Matania who converted the chance with a hard shot into the bottom corner, past Burgers.

lead. With time running out in the half, Germany did take the lead. Fuchs was involved, working the ball on the baseline and finding Stalkowski with an accurate cross, the German number 26 made no mistake and gave his side the lead at half time.

Straight after half-time Germany won another penalty corner. With a perfectly executed routine Martin Haener picked out Florian Fuchs who deflected the ball into the roof of the net to make it 3-1.

Australia tried to respond and get themselves back into the match, Hammond found Ford on the baseline and the Australia No10 lifted the ball over Jacobi, only for Haener to clear the danger.

Australia’s high press and constant running yielded a sustained period of pressure; however outstanding work from Haener, Phillip Zeller and Captain Max Muller was keeping them at bay.

Having weathered the storm, Germany started to come back into the game as an attacking force, Oskar Deecke and Furste combined well, but the latter could not get his shot off. Australia went again and Ockenden and Orchard combined to set up a chance which the latter could not get on the end of. Australia called a video referral as they felt Orchard was fouled. The decision was given and this time Gohdes stepped up and converted the penalty to draw his side back into the contest.

With Australia pushing for another goal this inevitably lead to gaps in the back line, Fuchs rode a challenge to find Matthias Witthaus at the back post, who converted the chance to make it 4-2. 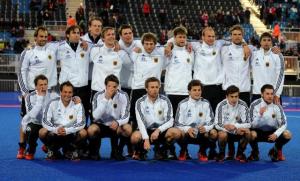 As the game entered its final phase Jacobi kept out a succession of penalty corners to preserve his side’s lead. Germany put a gloss on the score line when Phillip Zeller converted a late penalty stroke and the Australians were beaten.

Obviously Australia have some quality to come back into their squad, however the Germans will have struck a huge blow to their rivals’ confidence with the two wins in this tournament. Even when the Australians were on top, the defensive work of their European rivals was hugely impressive. Whilst one hates to revert to stereotypes, their efficiency and ruthlessness in front of goal was clear to everyone.

Roll on the Olympics!