Two goals from Leicester’s Crista Cullen, both from penalty corners, were enough to give Great Britain the gold medal in this competition.

The game between the two sides that had clashed yesterday in the group phase started out as a very cagey affair with both sides sizing each other up like two prize-fighters in the ring.

It took a while for any clear chances to be created. On 8 minutes, Argentina won their first penalty corner. The first effort was charged down by Emily Maguire, resulting in another corner which was this time cleared by Helen Richardson on the post.

Great Britain seemed to be struggling to find their rhythm in the early going and were indebted to Beth Storry for keeping out a Carla Rebecchi penalty corner on 15 minutes.

With the crowd roaring them on, the hosts finally sparked into life in the 17th minute. Alex Danson was felled outside the D winning a penalty corner. Kate Walsh’s low drag flick was saved by Laura Del Colle. The rebound fell to Laura Unsworth who hit a rocket on the volley which flew narrowly over the top.

On 21 minutes, Argentina threatened again, Carla Dupuy ran through unchallenged but connected only with fresh air on her reverse stick.

Britain were starting to become more of a threat on the attack, Chloe Rogers showed superb vision to send a pass 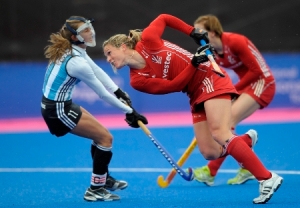 towards Susie Gilbert who slid in and deflected narrowly wide.

Sarah Thomas went close right at the end of the half but couldn’t quite bring the ball under her spell, allowing Laura Del Colle to smother the chance.

The sides went into the break deadlocked at 0-0.

Immediately from the restart Leicester star Chloe Rogers burst into the D, just as she was about to pull the trigger she was tackled superbly. Great Britain didn’t have to wait much longer however as a mere minute later Alex Danson won another penalty corner. Up stepped Crista Cullen to send a low flick pas Del Colle into the bottom corner to send the crowd into raptures.

Continuing the breathless opening moments of the half Carla Rebecchi was unlucky to see her shot cannon back off the post with Storry beaten. Argentina forced a penalty corner from the rebound. The corner was mistrapped but slapped goalwards by Rebecchi only to come back off the post for the second time in as many minutes,

After 7 minutes of the half Alex Danson showed wonderful close control to see off 3 opponents and force another penalty corner for her side. Again Cullen stepped up, going the same side but higher up and again she beat Del Colle to double her side’s lead. Cullen had to leave the field straight after having turned her ankle after being caught by the number 1 runner on their follow through.

After 10 minutes Argentina threatened again, Delfina Merino made a strong run but was stopped in her tracks just inside the D by a splendid tackle from Captain Kate Walsh.

Martina Cavallero had a good chance to halve the deficit but saw her reverse stick effort going flying wide of the far post.

18 minutes into the half a worrying moment for Great Britain as talismanic striker Alex Danson was forced to leave the field with a shoulder injury after a collision outside the D. The extent of the damage is not yet known.

With Danson off the field, Argentina pushed again for a goal. Cavallero again ran through strongly and hit a reverse stick shot but was kept out by Beth Storry, still yet to be beaten in this competition. Storry was alert again making fine saves from Sofia Maccari and for a third time, Cavallero.

With the clock running down Laura Unsworth, who had an outstanding game, picked out Helen Richardson. The Reading midfielder showed excellent skills along the baseline and engineered space for a shot which was well saved by Del Colle.

With the clock against them, Argentina seemed resigned to their fate and Great Britain held on for a hugely satisfying win, their second against their old foes in as many days.

Great Britain celebrated in front of their home fans as they paraded their trophy and gold medals. They will hope to repeat that trick in the competition proper this summer. Winning here was a huge step in that direction.