In a repeat of last year’s final, Reading and Leicester, the two heavyweights of the ladies’ domestic game went head to head to see who would be crowned champions. There has not been a lot to choose between the sides this season; it would prove to be difficult to separate them once again.

The first half settled into a pattern that the game would follow for the duration: Leicester set themselves up to defend fairly deep and hit Reading on the break. The Sonning Lane side were being allowed a lot of possession but were finding Leicester’s stubborn defence, marshalled by the excellent Crista Cullen, very hard to break down. Reading had the better of the chances; Maddie Hinch was called into action to keep out a couple of penalty corners, and also denied Alex Danson in the first quarter. 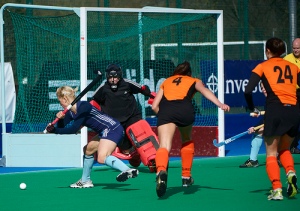 The second quarter was much the same, Danson shot into the side netting from close range, Cullen did well to charge down a Helen Richardson shot, and Reading continued to press their opponents as they searched for that all-important breakthrough. Leicester posed a great threat on the break. With the pace of Kerry Williams, Katie Long, Captain Vanessa Hawkins and the excellent Chloe Rogers, there was always a chance they could create something. Anne Panter too was becoming more of an influence, making some surging runs from deep forcing Reading to defend further back as the Pukkas enjoyed a spell in the ascendancy.

The second half saw Reading go even closer. A Kate Walsh drag flick was spectacularly saved by Hinch, diving to her right, whilst Danson, the league’s top scorer went close twice with two reverse stick shots. After 59 minutes, the deadlock was finally broken. Leicester broke out of defence and after good work from Katie Long and Hannah Macleod, won a penalty corner. A brilliantly worked routine saw Lucy Brown sliding in to the right of the goal to get a deflection and divert the ball into the net, over Beth Storry. The Reading fans were stunned, having seen their side dominate, only to fall behind to a fine penalty corner.

With just seven minutes left, some excellent skills down the Reading left from Becky Halle found Alex Danson in the Leicester D. Danson turned and fired a low cross to the far post where Amanda Potieger made no mistake and drew her side level, to the delight of the home crowd.

There was still time for another good chance for Reading as Helen Richardson played in Danson, only for Hinch to come

out and block; another great save from the Leicester goalkeeper.

And so the game went to extra time. Leicester won a penalty corner almost straight away, but it was saved by Beth Storry. Reading forced two corners of their own, but were unable to make them count. There was no way to separate the sides over 70 minutes, and no way to separate them in the additional ten either. A penalty shootout was the only way. Adopting the EHL rules, it was not to be flicks, but the ice-hockey style 8 seconds to score having run in from the 23-metre line.

Chloe Rogers went first for Leicester, scoring. Laura Bartlett equalised for Reading. Anne Panter was timed out after some excellent work from Beth Storry, shadowing her GB team mate before saving the shot after the whistle had gone.

Helen Richardson just managed to squeeze the ball past Maddie Hinch to give Reading the lead. Crista Cullen had to score, which she did, under intense pressure. With Reading needing to score to win, who better than the league’s top scorer and player of the year Alex Danson? Hinch again did well, narrowing the angle and forcing Danson to shoot wide to the disbelief of the home fans.

With the scores now level it was sudden death. Reading went first and Laura Bartlett was up again. This time, Hinch was equal to the task and saved, to give Leicester one hand on the trophy. Chloe Rogers stepped up with the chance to win it. Storry did well to force her wide, before Rogers cut back across the D, with time running out she coolly lifted the ball over the Reading goalkeeper and into the net to win the title for the Pukkas.

It was tough on Reading who had enjoyed the better of the game; however Leicester had come with a clear game plan which they executed to perfection. In the end, these two sides, as has been the case over the season, proved to be so well matched it was impossible to separate them without the use of a penalty shootout. Maddie Hinch was rightly awarded the player of the match after her string of fine saves in normal time and then her crucial save in the shootout ultimately proved to be the difference.

This entry was posted in Domestic Hockey. Bookmark the permalink.