Why I Love Hockey.

You know, whenever I tell someone I play hockey, their response is always one of a choice of three:

3.) “I used to hate hockey at school. Always cold, on the grass, people hitting your shins. I hated it.”

For some reason, during my younger days, these responses used to wind me up. I’m not sure why, call it the petulance of youth. As I’ve got older, I actually find myself laughing at these and thinking how much these people have missed out.

Hockey, whatever the level you play it at, is brilliant. From the thrill of competition on the field, to the friends, nights out and memories off it, there are few things like it.

It doesn’t sound like much, but I can assure you, the differences in those two lists make for a more interesting life than people realise.

Sport isn’t for everyone, but I defy anyone to come up with a better feeling than the one you feel at the end of a hard-fought victory on the hockey field. You might have won 1-0 in a 4th team game at your cross-town rivals. You might have come from behind in a 1st XI game to win 3-2 with a goal in the last-minute. You might have just scored the winner in the Olympic Final. Whilst the importance of each of those varies in the grand scheme of things, each of them has the potential to make the protagonists feel invincible, if only for a few hours, before bruises, aches and pains set in. There really is nothing like it.

It provides a welcome distraction from the grind of every day life too. We’ve all had those days; nothing goes right at work, you have things going on at home, your mind is going a mile minute.

Fortunately, you get to go to training where you and a group of your friends get to have a laugh. You have the chance to run around and push yourself and forget all the frustrations of the rest of your life. What could be better?

Similarly, I take a strange sense of pride when I consider how hockey measures up against other sports. Although an element of chat between players and officials goes on, the use of 3 cards, plus the self-pass rule means that on the whole, discipline is impeccable when compared with football. As well as ensuring players don’t have time to argue, the self-pass rule makes the game faster and more exciting than it has ever been. I love that.

The skill levels involved in the game are also remarkable. Whilst not without its physical elements, hockey is a non-contact sport. This means that whilst physical prowess can undoubtedly be an advantage, there is also a huge emphasis on technique and skill rather than brute force. For me, this makes the game all the more appealing.

Undoubtedly the on field side of things is very fulfilling. Off the field too, hockey is like no other sport I have played. Most of my best friends are people I’ve met through the game. Some of those people are from walks of life and social/economic groupings I simply would not have the chance to interact with normally. It’s funny though, once you are in the club house, after the plumber who plays sweeper has spent 70 minutes fighting tooth and nail to protect the barrister who plays in goal, whilst the admin assistant up front scores a hat trick, no one really cares where you’ve come from or what you do, it’s all about who you play for.

That bond between players, the feeling of having stood shoulder to shoulder in the trenches, I think, makes your friendship that bit different to those of the “normal” non hockey-playing people. I know for a fact that these people will always come through for me, in a non-hockey sense as well as a hockey one. Off the top of my head, my “hockey family” have helped me move (countless times), painted and papered my house, driven me to the hospital, put me up in their homes, given me legal advice and even fixed my kitchen sink. I could go on. Not bad eh?

The socialising is something I love, too. I can walk into the hockey club and immediately feel welcomed by a sea of friendly, familiar faces. I know this is the case in clubs across the country.

As I get older, I don’t necessarily participate in the drinking culture as much as I used to. However, every time I dare to get involved, I always end up having a brilliant night. It’s a combination of the closeness and camaraderie that I have already mentioned, plus the relentless attitude of everyone involved wanting to have a great time. Jokes, Mickey-taking, 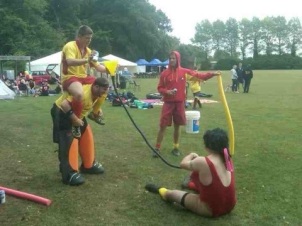 songs, games, philosophy (after many beers), why the coach should have played someone more this week and a multitude of other things are prevalent in each and every night out. And yet, each and every hockey night out is different. I’ve lost count of the number of times I’ve started anecdotes with “We were on hockey tour”, “We’d been at the hockey club”, or “So I was out with the lads from hockey” and then gone on to recount a tale of yet another great memory for myself and my friends.

Don’t believe me? Have a look at this selection of Tweets The Top of the D received this past week:

@Uberhockey: #whyilovehockey is all down to the #hockeyfamily. Spent my teen years in the clubhouse. Better than boozing on the streets!

@BedfordHC_L1s: Training in the cold and rain, sober Friday nights, unexplained bruises and injuries…the feeling of winning with your team. #whyilovehockey.

@PatrickAlvgren: #whyilovehockey because the speed and skill involved is #epic.

Those Tweets concisely sum up exactly what I have said above: Lots of people love the game, and it’s easy to see why. Why not have your say? Tweet us (@TheTopoftheD) using the hashtag #whyilovehockey, or leave your thoughts in the comments section below.

For any women keen to take up the game, have a look at England Hockey’s “Back to hockey” initiative.

Or, just turn up at your local club and get involved. You can find your nearest club here.

You won’t regret it!

4 Responses to Why I Love Hockey.