Posted on February 6, 2012 by thetopofthed

A world class performance from Reading goalkeeper Beth Storry was not enough to secure Great Britain’s first ever Champions Trophy gold medal as they were beaten by the hosts in a pulsating game in front of a partisan home crowd. 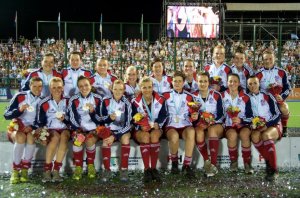 Argentina had enjoyed the Lion’s share of the possession and chances with Britain forced to feed on scraps from breakaway attacks. Nicola White had the visitors’ best chance of the opening 20 minutes when she cut inside, beating three players after being found by Laura Bartlett only to see her shot charged down.

With Luciana Aymar becoming more of an influence and Rocio Sanchez Moccia’s outrageous stick skills always a threat, Argentina forced a series of short corners in the early going. Although under extreme pressure, the British defence had yet to be breached by a short corner in this tournament. That record was shattered in the 28th minute as Silvina D’Elia’s effort somehow found a way through Beth Storry and trundled into the corner. This caused a bit of a wobble in the GB defence and almost immediately after the goal a dangerous cross almost resulted in a second. Storry showed great alertness and bravery to smother the chance and keep the score at 1-0.

With time running down in the half, top scorer Crista Cullen was allowed the chance to score from a short corner. Her low flick had the beating of the goalkeeper but was diverted wide by the defender Rosario Luchetti on the line.

With a minute left in the half, Argentina forced another short corner. Storry did well to block the first effort going low to her right, and was up quickly to deflect the follow up behind for a long corner. It was a splendid piece of goalkeeping when her team needed it.

Great Britain came out for the second half looking determined to get back on level terms. Sarah Thomas’ pace going forward was always a threat, often taking two or three opponents to halt her progress. Nicola White was unlucky not to make more of a chance that fell her way, connecting with fresh air when attempting a tricky reverse stick effort. Helen Richardson showed her class once again, rivaling her illustrious opponent Aymar with a series of lung-bursting runs and her usual skill and dogged competitiveness. Storry too continued to do her part to keep her side in it, making another two fine short corner saves low to her right as Argentina pressed for the all-important second goal.

Great Britain found the home defence very hard to break down, and clear chances were increasingly difficult to create, a testament to the hard work and organisation that Las Leonas demonstrated. GB’s final chance came from Alex Danson. The Reading forward did well to find space in the D, only for her reverse stick cross-shot to avoid everyone and go out of play.

Great Britain could not find a way through and Argentina celebrated their fifth Champions Trophy win. In truth, the 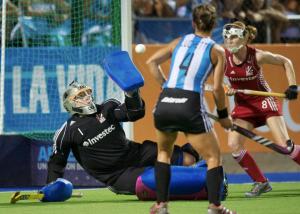 hosts probably deserved the victory, their defensive work was hugely impressive and they always posed a threat going forward. Great Britain however, can be extremely proud of their efforts, pushing their illustrious opponents all the way. Danny Kerry’s side can boast a tournament record of played 6, won 4, drawn 1 and lost 1. It is a record that any side would be proud of, just a huge shame that the “lost 1” happened to be the final.

A crumb of comfort for the GB fans among you: only one side has won the Champions Trophy and then gone on to win the Olympics. (Australia in 1995/1996.) I’m sure Kate Walsh’s girls will settle for the silver here, if they can console themselves with the Gold in this summer’s tournament.