Despite guaranteed qualification for the quarter finals of this competition, Great Britain went into their final pool game looking for a positive result not only to maintain their momentum and form from the first two games, but also to ensure a favourable draw in the next round.

A rainy day and cooler temperatures did nothing to dampen the Great Britain girls’ spirits as they came out of the blocks fast and imposed themselves on the game from the first whistle. Indeed, they thought they had won a short corner inside the first minute but were disappointed as the umpire gave a hit just outside the D instead.

GB didn’t have to wait long, however. In the 4th minute Emily Maguire drove strongly along the baseline, and won a short corner. Crista Cullen, scorer of two in the last game against the Dutch stepped up and scored. In truth, the goalkeeper Dongxiao Li should have done better, seemingly moving out of the way to allow Cullen’s shot to nestle in the net. The Great Britain girls were not complaining, however. 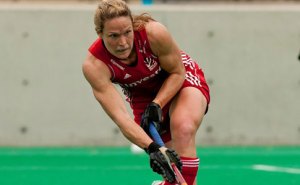 Great Britain continued to dominate. Having got the early goal, they seemed content to maintain possession and wait for an opening rather than forcing the attacks. China struggled to assert themselves as an attacking force, but did have the ball in the Great Britain goal with their first attack. Lihua Gao claimed a touch in the D from a Baorong Fu cross, however the video replay proved inconclusive and the goal was not given.

This scare did not seem to knock Great Britain off their stride, their quick restarts causing the Chinese defence all sorts of problems. It was from one such restart that GB forced their second short corner of the match. Cullen tried her luck again, but this time goalkeeper Dongxiao Li made a fine stick save to her right to keep the Leicester star out.

Great Britain were pressing high up the pitch and making it difficult for their opponents to get out of their half. Goalkeeper Beth Storry was largely a spectator, only being called into action to make a couple of routine clearances.

With time running out in the half, Helen Richardson showed terrific 3-D skills to beat 3 defenders on her way to the baseline. She tried to cross to a team mate but was unable to squeeze the ball past the goalkeeper.

As the teams went in for the break, it was fair to say the game had not been a spectacle. Great Britain’s high press had meant China had found it difficult to create any chances. Most of their attacks relied on balls into the D from outside the 25, looking for deflections towards goal. Great Britain themselves had not created a glut of chances, but their patient, methodical approach and the threat of Crista Cullen from short corners gave them the edge over their opponents.

China came out strongly in the second half, Emily Maguire and the excellent Laura Unsworth did well to keep them at bay.

With 7 minutes of the half gone, Laura Bartlett won a short corner after yet another quick restart. Although the corner did not quite go to plan, Cullen’s shot bobbled into the corner off a defender’s foot to double the lead. Not the slickest of moves, but a goal nonetheless.

China tried to respond, their most dangerous player Baorong Fu became more and more of an influence on the game. With 13 minutes of the half gone, Anne Panter’s attempted control took the ball away from captain Kate Walsh and Fu made no mistake from close range to halve the deficit.

China, now enjoying their first spell of dominance forced a short corner, but were kept out by some strong defending. This period in the ascendency was cut short around 4 minutes later: Nicola White’s long pass found Chloe Rogers in the 25. Rogers showed terrific skill and composure to lift the ball over the goalkeeper, her shot narrowly missed the target, but Ashleigh Ball picked up the rebound to score with a well-taken reverse stick shot. 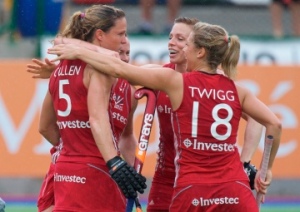 The game threatened to peter out with Great Britain happy to protect their lead and China visibly tiring. However Helen Richardson and Fu were having their own personal battle. Richardson showing great power, pace and skill to win another corner which Natalie Seymour saw saved by the goalkeeper.

There was still time for one more chance each: Alex Danson teed up Laura Bartlett, only for the Reading star to see Li make a terrific stick save to keep her out.  At the other end Beth Storry saved from Yibo Ma’s short corner. That was that.

Great Britain collected the points having put in a strong, controlled display. Their press made it extremely difficult for their opponents to get into the game and their quick restarts and awareness of where their team mates were meant they were always a threat going forwards. Laura Bartlett had an outstanding game, whilst Helen Richardson showed her class once more. Laura Unsworth too was very impressive defensively.

It was hardly a classic, but Great Britain will go into the knock out phase in confident mood after a thoroughly professional performance.