Roared on by a fervent home crowd, Great Britain finally put the finishing touches to their play, something they had struggled with in the early part of the week.

The game started at a frantic pace, with both sides trying to impose themselves on the game in the early stages. Five minutes in Emma Clarke was set up by Nicola Daly but found Beth Storry in no mood to surrender her clean sheet, saving well.

On 11 minutes, Macleod notched her first of the game. Great Britain worked the ball around the baseline well, with Susie Gilbert finding Macleod who needed no second invitation to despatch the chance and give her side the lead.

Great Britain were growing in confidence and Anne Panter and Kerry Williams both went close with diving deflections. 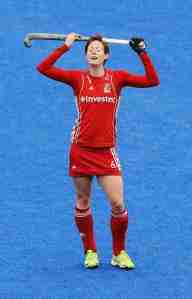 With 15 minutes gone, Macleod notched her second of the match. A splendid run from Chloe Rogers caused panic in the Ireland defence and with Susie Gilbert in close attendance, Macleod slapped home giving Pamela Smithwick no chance.

Ireland were by no means spectators, putting together some good patterns of play, Aine Connery derives great credit for her ball retention in the middle of the field under extreme pressure, whilst Nicola Daly, who has impressed in this tournament made a series of excellent darting runs in an attempt to cause the Great Britain defence some problems.

At the end of the half, Ireland forced two penalty corners, the first was well saved by Storry from Audrey O’Flynn’s drag flick. The second was also dealt with comfortably by the Great Britain goalkeeper.

The second half of the match took a while to catch fire. Great Britain continued to dominate, but seemed to be struggling to create clear cut chances.

On 50 minutes, Great Britain won a penalty corner. In a clever routine the ball was pushed long to Laura Unsworth, Unsworth slipped the ball into Nicola White who connected with fresh air as she went to shoot.

On 59 minutes, Great Britain enjoyed more success; Emily Maguire’s fierce straight strike fizzed in for her first international goal, to the delight of her mother, watching in the stands.

Chloe Rogers went close, and Maguire was denied from another corner and the game finished 3-0.

Danny Kerry was far from happy at the post-match press conference: “I’m disappointed with our performance. Our skill execution was poor and we should really have put them to the sword. I was happy with the performance when we lost to Germany, but was not happy with it today, when we won. We won’t get away with that in the Olympics.”

Beth Storry was slightly more upbeat, having captained her country for the first time: “ To captain your country is an incredible honour, especially when our usual captain is such a phenomenal player and leader. I was a bit nervous beforehand but it’s an honour to do it, and an honour to play with such a talented and amazing group of players.”

The Top of the D would like to congratulate Anne Panter on making her 50th GB appearance today, and Laura Bartlett on her 100th international appearance.